Red Led Bubble From the 70s. 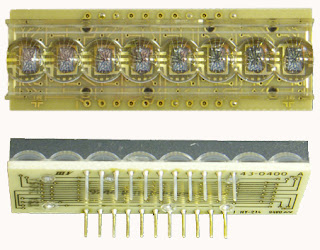 I found this special Red led bubble in ebay by (powerandlight).
It looks so cool to me. I didn't see this led before, I found out that it should be similar to one used in TI-59 or other old calculators in the year 1977. It was not in production anyway.
Each bubble can display A-Z and 0-9. It should be the same as 15 segment LEDs nowadays. I hope it can be larger otherwise it is so small to use as a cool display.

Jeroen used the AVR ATtiny2313 with 74HC595 to drive this cool red bubble, as he called "Starburst Led" project:

Posted by Bitartist at 7:27 AM

All my works are licensed under a Creative Commons Attribution 3.0 United States License.